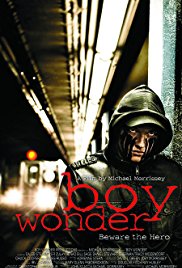 A traumatized boy grows into a shy, determined teenager who patrols the mean streets of New York City, helping those in need and dishing out severe punishment to remorseless thugs.

I was pleasantly surprised by this film. A typical revenge-movie. But it was put together pretty well  with a surprising end. Caleb Steinmeyer plays the teen who’s hungry for revenge in a very realistic way. He looked tormented the whole movie.

The few fight scenes are short but energetic and pure violent. “Boy Wonder” is actually not so bad when you think of all the other crap thriller that have flooded the market recent years. Keep an eye on that guy Caleb. I think we’ll hear from him much more in the future !