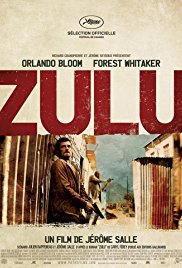 Policemen Ali Sokhela and Brian Epkeen investigate the brutal murder of a young white woman, apparently provoked by the availability of a new illegal drug and somehow connected to the disappearance of black street children.


“Death on the Nile” but in the present time and a little further to the south on the African continent namely Cape Town, the jewel of South Africa. A typical detective story in which two very different detectives are searching for the murderer of the daughter of a famous rugby player. Despite the many clichés and typical characteristics of the two detectives, it has become a surprising film. Brooding, menacing, hard, and intense. A dark and grim study in which the spirit of the old apartheid regime is still present.

“Zulu” closed the 66th edition of the Cannes Film Festival. It is an adaptation of the novel by Caryl Férey and made by the French director Jerome Salle. The opening scene immediately gives an indication of what you can expect. It’s a black and white fragment. A flashback to 1978 at the time of the apartheid in which a small young kid witnesses how his father is burned alive. This little boy is Ali Sokhela (Forest Whitaker), one of the two detectives and head of “Cape Town’s Serious Violent Crime Unit” who is in charge of the murder investigation. Later in the movie, you get to see the sequel of this flashback. A grim and gruesome sequel that clarifies why Ali deals with his amorous bonding with a particular woman in a very special way.

The second detective Brian Epkeen is played by Orlando Bloom. A surprising rendition by Orlando who normally got well-mannered and clean-shaven roles in previous movies. However, Epkeen has a rugged image. He looks rather crumpled with a not-so-fresh and unshaven appearance. A womanizer who’s always late for work and an emotional wreck with a failed marriage and a son he doesn’t seem to care for. His son hates him like the plague. As a result, he has an alcohol problem and he takes every opportunity to seduce a woman who crosses his path. A petulant and pedantic nuisance who does everything in his own way. And yet Ali believes in him and thinks he’s a decent detective.

Ultimately “Zulu” is no more than a brutal police film with drugs, gangsters, corruption, and again a pharmaceutical company involved. It’s something less casual than “Starsky and Hutch“, but the unfolding of the story follows a well-known pattern. Whether or not there have been experiments to decimate the black population, I don’t know, but it sounded pretty far-fetched in my ears. If it’s authentic, then the regime was sicker than we can imagine.

The two protagonists were realistically portrayed. Forest Whitaker used again his “Droopy” expression and looked frighteningly thin. The traumatic past that he carries is constantly present and shown. However, Orlando Bloom made ​​the biggest impression on me. A grim role he hasn’t played before, but he still manages to shine quite successfully. I found the South African dialogues interesting. This emphasized the authenticity of this film.

South Africa is dark and gloomy in this film. Full of poverty and hopelessness, hatred and resentment. So many things which can never be forgiven. Despite the sometimes beautiful images of the coast and the wealthier neighborhoods, the overall picture remains a depressing one. The explicit action ensures that it exceeds the average detective movie. And at times it’s intensely exciting. The furious pace of the movie makes it a thrilling experience from start to finish.