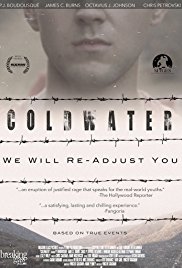 A teenage boy is sent to a juvenile reform facility in the wilderness. As we learn about the tragic events that sent him there, his struggle becomes one for survival with the inmates, counselors, and the retired war colonel in charge.

Welcome to paradise boys. This is Coldwater.
I am Colonel Frank Reichert, United States Marine Corps, retired.
You can call me Colonel. You can call me sir. It’s up to you. The choice is yours.
Life here, gentlemen, is very simple.
Let’s not bullshit each other. You’re here because you fucked up.
We’re here to fix that. So, you show me that you have a willingness and desire to change.
Simple as that.

“Coldwater” eventually evolved into a rather impressive and hard pruning drama in which the existence of so-called re-education camps in the US are denounced. The film isn’t based on an actual true story (I guess), but is an outline of how things are done in such disciplinary camps that actually exist there and where the shown practices are applied daily. These places are rather prison camps where humiliation is a standard instead of re-education. The objective is more like a psychological torture of young people who end up there, with the sole purpose to get them back on the right track before they risk an actual prison sentence. The juveniles are sent there at the insistence of the parents to guide them into a better and controlled life without crime. But I’m afraid some youngsters end up there because parents are fed up with them or are in the process of picking up their own miserable lives without a reluctant and rebellious child. This is proved by the presence of a sniveling chubby kid who was sent over there because he got bad grades in school and did some ditching.

We see Brad Lunders (PJ Boudousqué) being lifted from his bed in the middle of the night, being handcuffed and dumped in a van between some other victims, while his mother looks at it with a face scarred by guilt. And before he knows it he arrives in camp “Coldwater“, led by the former marine Colonel Frank Reichert (James C. Burns) who believes in certain values like discipline and disciplinary penalties for indiscipline. It’s obvious that some practices aren’t kosher and are being covered with the cloak of charity. Reichert is assisted by trustees: young men who also ended up there once and voluntarily, or perhaps forcibly, choose to participate in the re-education of young offenders. This place somewhere in the middle of nowhere is like hell on earth for these internees and can be compared to a prison camp from the 2nd World War. Perhaps the applied tortures aren’t as horrible as those in that period, but the impact of it on these young people is indisputable. Similarly for Brad, who realizes that he can only survive by accepting this rotten system and that it’s better to fit the straitjacket prescribed by the sadistic camp leader.

I’m sure this will be repeated indefinitely, but Boudousqué eerily resembles Ryan Gosling. Not only his physical appearance but also his style of acting is the same as that of Gosling. That stoic calmness he exudes, that serene facial expression showing how he assesses each situation and the determination with which he concentrates on the intended goal. But despite his angelic appearance, he’s not unconditional innocent. In terms of character, he differs at first sight considerably with the character of Burns. But on second thoughts they are more alike than you’d expect: they both suffer from a traumatic experience out of the past and they both have leadership qualities. And despite that Brad hates the Colonel and wants to pull the rug out from underneath him, he could become someone like him.

“Coldwater” was a terrific movie to watch, despite the sometimes uncomfortable scenes. Perfectly imaged, at the right pace. Vincent Grashaw intuitively developed this difficult story. Without realizing, a period of 2 years elapsed subtly punctuated by several flashbacks which gave us an insight into the life of Brad. Certainly not in a disturbing way and brought in a fluid manner. And the moment you conclude that it’s a typical moralizing film, the final denouement hits you like a sledgehammer. A discharge of pent-up anger and frustration that degenerates into a chaotic situation full of rage and revenge. Ultimately the film leaves you with mixed feelings. As soon as the situation became clear, there’s a sense of compassion and you sympathize with the youngsters who try to survive in these inhumane conditions. By the end, this feeling is still reverberating, but perhaps some of them belonged there. I’m sure these situations don’t occur everywhere as shown here.  However, it is better to avoid such a place as “Coldwater“.