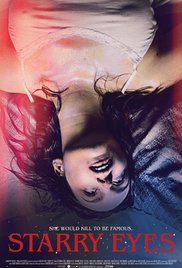 A hopeful young starlet uncovers the ominous origins of the Hollywood elite and enters into a deadly agreement in exchange for fame and fortune.

What do you do when you conclude that the film you just started watching, probably will end up in your top 10 of the most vexing and lousy movies ever? Indeed, swiftly start another film in the hope that it will be a better one. The same happened to me tonight after watching “Muck” for 15 minutes. First, there was the rather abrupt beginning where it was immediately clear what acting level I was dealing with (again some selected B-actors). And then the opening credits appeared, focusing on the silicone attachments of a half-naked cheerleader who stumbles back and forth in what looked like a swamp. Then one of those bimbos was wondering whether or not there was liquor in the house they saw in the distance. She was wondering about that in such a way that it looked as if she was planning to start a party with her frolicsome friends, while one of them was bleeding to death and they left two others behind, who were killed. For me, that was the moment to grab the remote control and save myself from further suffering. Fortunately, because “Starry Eyes” is of a whole other level and the content is a lot more original. It’s equivalent to “Spring“, which I’ve seen recently. Not that the core of the story has never been used in a film before, but its impact and the way it evolves, made sure it was yet again a unique experience.

Sarah (Alex Essoe) is an actress who apparently can’t manage to get a part in a film. Every day she consults a website where ads are posted by producers and movie houses who are looking for new acting talent. Mostly these are low-budget and arty film projects. Meanwhile, she works as a “Tater Girl” at Big Taters, a kind of McDonalds run by a perverse-looking manager. He’s someone who always brings up some philosophical theory about how they all function as one big family, but ultimately he’s more interested in certain curves of Sarah (particularly her perfect butt looks appetizing in her stretchy work uniform). Sarah shares an apartment with her friend Tracy (Amanda Fuller) and in her free time she hangs out with Tracy’s friends who encourage and support her. Except Erin (Fabianne Therese) who can’t resist making arrogant and hurtful remarks all the time. Until one day Sarah needs to do an audition for Astreus Pictures and she is willing to do anything to achieve her goal.

In short, you can summarize “Starry Eyes” as follows: a sort of “Rosemary’s Baby” (but in another sinister way), with the terrifying consequences as in “Contracted” or “The Fly” and this mixed with the better slasher work from horror films in the ’80s. The producers of this film have chosen a tranquil development of the story. Therefore it will take some time before it starts to get all gloomy and scary. But the big finale is worth it. The first part they’ve put enough energy into the introduction of the different characters. Sarah is a fragile and sometimes puny-looking character who’s full of doubts. Doubts about her skills, her talent, and her appearance. She looks like someone with an eating disorder who snatches hair from her head at stressful moments. According to her so she can concentrate herself again. She’s an insecure person full of complexes. Even her smile is uncertain (and uncannily resembles that of Keira Knightley, which gives me even extra shivers). The friends of Tracy, however, are a hotchpotch of libertines who live from day to day (sleeping in a van in someone’s garden). It’s as if they are constantly drunk or high and party all the time. A group of hedonists, but with envy and hypocrisy just around the corner.

“Starry Eyes” won’t be appreciated by everyone. On the one hand, it’s sometimes quite bizarre to observe. The two people at the table during the audition at Astreus Pictures and the manager of Big Taters are a living proof of that. Bizarre characters who undoubtedly deserve a place in a mental institution. On the other hand, the slow transformation that Sarah undergoes isn’t exactly appetizing to look at. The reward that she gets by meeting certain requirements that were asked by the producer Astreus Pictures, is preceded by a period in which Sarah deteriorates both physical and psychological. She slowly turns into an unreal individual with psychopathic tendencies resulting in a bloody final piece. The way Alex Essoe gives shape to the character Sarah, is at times brilliant. The final transformation leaves an overwhelming impression and shows the natural beauty she possesses. Hopefully, we’ll see her again as a leading actress in another movie. Also, Fabianne Therese as the fake girlfriend who’s constantly trying to undermine Sarah’s confidence and the eccentric Taters boss (Pat Healy) were enjoyable. And finally, Mary Olsen and Marc Senter as the casting director and her assistant fitted perfect in it.

Of course, some will say that the final story is not too original, and it eventually became a typical horror with some gore clichéd images. But for me, this was a successful and impressive film that, after a slow beginning, bursts out into a climax. Perhaps the macabre character of this film and the quirky way of elaboration made it into a memorable one. The only thing I was slightly disappointed about was the total lack of background information about the satanic (if you can call it that way) sect. It remains a bit mysterious. However, I am sure this film left that monstrosity called “Muck“, effortlessly behind. A fascinating film!