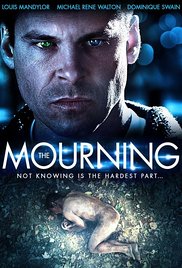 20 years after going MIA in Desert Storm, Aaron returns home under mysterious conditions, not having aged since his disappearance, and must reestablish relationships with loved ones before an imminent return to an ambiguous other-worldly existence.

You have movies where you have no idea what’s coming your way. And finally, when the end credits run over the screen and you’re still staring at it, you’re wondering what you’ve just seen and what the hell it was about anyway. “The mourning” is such a film. A Science-Fiction (I guess) about a marine who pops up again after he disappeared on a mission in Operation Desert Storm 20 years ago. And he returns as naked as a newborn suckling. “So what”, you say uninterested, “That’s what Schwarzenegger already did before in Terminator II”. Maybe he came back on foot and walked for 20 years all the way from the desert back to his hometown. Well, that’s a possibility, except that he still looks as young as when he disappeared. And now you think perhaps the beneficent effects of the sun had something to do with that or maybe he only consumed biologically healthy food which is good for the skin. But then there’s also the astonishing fact that he can’t speak a single word. Yeah, now I got your attention … Uhm … or not?

And so you have a summary of the first hour of this slow and boring movie. Aaron (Michael Rene Walton) awakens in his birthday suit somewhere in the middle of a forest (a bit similar to “Almost Human“), not knowing how he ended up there. The first thing I noticed when he went to his home town, was the complete desolation. There’s no living soul in the vicinity of the city or in the city center itself. It seems like everyone is abducted. You don’t need to be a psychic to realize that almost everyone’s mouth drops open from amazement when seeing this long-lost war hero. And then it’s time for the tedious Question Time.

I stopped counting after a while so I really don’t know how many times people asked that same question over and over again: “Aaron, where have you been all that time ?“. It’s understandable that he can’t explain it the first half-hour, since he produces as much sound as a broken radio. But the moment he starts speaking again, the guy still refuses to give a sensible explanation. Believe me, that started to get on my nerves severely.

Of course, you can work out different scenarios as an explanation for the peculiar behavior of Aaron. It could be that he suffers from PTSD and therefore lost his speaking skills because of the traumas. Or perhaps the entire movie was just a dream for him. Or maybe (drumroll) he was kidnapped by Martians and he peacefully lived for 20 long years in a Martian colony. Or worse, in all those years he was subjected to sadistic alien experiments. The cause of his silence would be due to the fact that he no longer knows how to speak because he communicated during that period telepathically. There’s also someone else convinced of that. An annoying woman with a ridiculous haircut who suddenly appears out of nowhere, so she can cross-examine Aaron all the time about that last possibility.

Ultimately, it’s all guesswork in the end. You’ll sit there in front of your television without any explanation or clearance. I like a profound movie from time to time. A movie with things not that clear and obvious. But this was absurd. So if you have some spare time and you want to spend it in a meaningless and purposeless way, I recommend you watch this empty creation. At least it was still of some use. And hopefully, I haven’t stepped on an alien creature’s green long toes, so they come and abduct me!