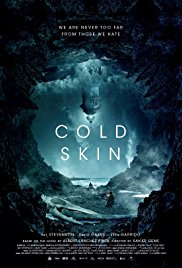 In 1914, just after of Franz Ferdinand's assassination that eventually caused World War I, a steamship approaches a desolate island on the edge of the Antarctic Circle, where a young nameless man is poised to take the post of weather observer, to live in solitude at the ends of the earth for an entire year until the arrival of his replacement. For the next twelve months, his entire world will consist of a deserted cabin, the surrounding sea, and dangerous strange beings that he discovers are sharing the island.

We are never very far from those we hate.
For this very reason, we shall never be truly close to those we love.

This film is as vague as the reason why the nameless young man (David Oakes) seeks refuge on a rocky island in the Antarctic Ocean. Initially, he has to relieve another meteorologist. But the question of the captain what he’s running from remains unanswered. Did he do anything wrong during WWI? Or is an unrequited love driving him to this isolated island? No idea. And in the end, this isn’t important anyway. The problem is that the man he needs to replace is nowhere to be seen. The only living soul still present on the island is the primitive looking loner Gruner (Ray Stevenson) who’s hiding in a lighthouse.

It’s rather unclear why those fish people attack at night.

Gruner isn’t very talkative. But soon the young man realizes that his safety isn’t guaranteed at night when water creatures start crawling out of the ocean. When the meteorologist sees his accommodation go up in flames after the first evening, he’s forced to stay with Gruner in the lighthouse. There he discovers that Gruner keeps such a female amphibious creation (Aura Garrido) as a kind of pet. She serves as a maid and as a sex object who’s being abused by Gruner. The reason why the creatures attack the lighthouse at night is rather unclear. Are these attacks a need of conquest? Or are these rescue missions?

For me, this wasn’t horror.

I wouldn’t call it a horror. Or should the used symbolism frighten the viewer? A symbolism that shows how a man behaves towards strangers and even towards those it knows. Is it a reflection of the brutality we know in our society? The suppression of other individuals and the abuse that comes with it. Eventually, you are wondering who the monster is here. The ones who abuse a helpless being from the sea? Or the creatures who storm the lighthouse every night? Some admiration for the acting of Stevenson. He succeeds in showing that cruelty and madness in an excellent way.

First “The shape of water” and now this. Something fishy going on?

I wasn’t really impressed by this film. The story isn’t really overwhelming and tends to be repetitive after a while. Despite the action-packed attacks and a few jump scares, this is ultimately just an average film. And the comparison with “The shape of water” is quite striking. The eradication of a fish-like being for self-profit and sexual interaction between this being and someone of the human race can be found in both films. The only difference is that in “Cold Skin” it’s a whole bunch of those ocean dwellers.