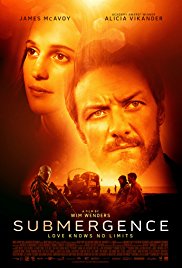 In a room with no windows on the eastern coast of Africa, a Scotsman, James More, is held captive by jihadist fighters. Thousands of miles away in the Greenland Sea, Danielle Flinders prepares to dive in a submersible to the ocean floor. In their confines they are drawn back to the Christmas of the previous year, where a chance encounter on a beach in France led to an intense and enduring romance.

Our world is
firstly about power,
it’s only secondly
about education.

A calm movie from time to time is something I welcome. Not again such a flashy, action-packed hero film where you’ll get nervous because the scenes follow each other in a rapid pace and stroboscopic effects get you a cutting headache. “Submergence” undoubtedly belongs to the first category. So, no nauseating headache. No disorientation feeling. You will certainly not experience that with this ultra slow film. The only thing that made me nervous was the forth and back jumping between the stories of the two protagonists Danielle Flinders (Alicia Vikander) and James More (James McAvoy).

A dream come true for women. A guy who listens.

James is the kind of guy who knows something about every subject. A whiskey connoisseur, people connoisseur (one look and he knows that the bartender was an ex-rugby player) and also a literary man. He’s such a man who’ll sweep any woman off her feet. And not only because of his good looks but also because of his engaging and charming behavior. And mainly because he has mastered the art of listening. James works in Nairobi where he consults on water projects. In reality, he works for the British Secret Service. Well, I guess he does, judging by the mysterious briefing he got while walking around in an art museum. And also the situation he’s in afterward, has nothing to do with water sources.

Danielle is a bio-mathematician (and not an oceanographer as James calls it) and is looking for proof that life exists in the darkest depths of the ocean. A pioneering (and Nobel Prize-worthy) research that can result in eternal fame. So expect a lot of incomprehensible, scientific gibberish. Like this for example: “Some of the most common pathways of energy production in microorganisms, who live along the hydrothermal vents, are oxidation or reduction of sulfur compounds. The most common electron donor along the vents is hydrogen sulfide, making oxidation of sulfur-containing compounds the base of the food web in this environment.” Not exactly fodder for an average conversation. Danielle is such a typical female nerd whose work determines and directs her entire life.

In fact, they are two realists whose profession plays a central role and who probably don’t have the time or desire to make an eternal bond with someone of the opposite sex. Until they happen to meet on a Norman beach.

No, I wasn’t excited about it.

“Submergence” is not exactly an exciting movie. It all feels rather poetic. Even the title is an abstraction of the different facets of the film. The sudden blazing love. The predicament that James finds himself in Somalia. And the claustrophobic situation in a (Yes. Yellow.) submarine for Danielle. And the whole film gently bounces back and forth between all these storylines. To be honest, I found the romantic part the most impressive. It was a pleasure to watch how these two lovebirds explore and discover each other in one long passionate mating dance. Every time the film returned to this part, it became fascinating. I looked at the other two parts with a kind of indifference. Still weird that Alicia Vikander seemed too young to me in the role of Lara Croft in “Tomb Raider“, while in this film I didn’t have that feeling. I do understand the metaphors used in this film. But to be honest, I think it was neither fish nor fowl (no pun intended). In the end, I thought the storyline in this potpourri of romance and drama was pretty thin-skinned.