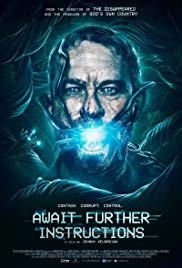 It's Christmas Day and the Milgram family wake to find a mysterious black substance surrounding their house. Something monumental is clearly happening right outside their door, but what exactly - an industrial accident, a terrorist attack, nuclear war? Descending into terrified arguments, they turn on the television, desperate for any information. On screen a message glows ominously: 'Stay Indoors and Await Further Instructions'. As the television exerts an ever more sinister grip, their paranoia escalates into bloody carnage.

I don’t think the messages are a government broadcast.
It’s almost like they’re reacting to what we do.

Initially, I would immediately add “Await further instructions” to the list of “useless movies that only ensure that you don’t start running into the walls out of boredom”. But on the other hand, this low-budget indie-SF was fascinating and amusing enough in my opinion. Not because of the story, because that was completely absurd and contained a denouement that didn’t make any sense at all. But because of the wonderful acting and the way this dysfunctional family reacted during Christmas, the most joyful festive period of the year. A period in which families usually come together to have fun and also to carry on a family tradition. It’s the period of the year when people bury an old family feud and sit down at the table to catch up while enjoying a drink and some food. There are countless films that show that this isn’t always the case. Like in “Krampus” and “Better watch out“. Even the McCallisters in “Home Alone” experienced this period as a time full of misery. Maybe not so macabre, but exciting enough. And in “Await further instructions” there isn’t a cozy Christmas mood as well. And certainly not when the Milgram’s house is wrapped as a Christmas present.

And not only the last mentioned fact ensures it’s not too cozy at the Milgram house. The mutual relationships also ensure that the tension remains high. Apparently, it’s years ago Nick (Sam Gittins) showed up at his parent’s place. And when he decides to pay them a visit, he turns up with his Indian girlfriend Annji (Neerja Naik) at his side. I suppose Nick knows all too well how some members of his family will react and he already feels there will be problems the moment he parks in front of his parental home. First of all, there’s the emotionless, authoritarian sounding father Tony (Grant Masters) who can hardly accept that he hasn’t heard anything from his son for years. The authoritarian tone is cynically dismissed by grandfather Alfred (David Bradley) who can’t resist telling Tony he’s way too tolerant. And worse. Alfred is a purebred racist who makes derogatory remarks about foreigners constantly.

Furthermore, you’ll meet the good-hearted mother Beth (Abigail Cruttenden). She’s a typical housemother who, despite the tense atmosphere and knowing that Christmas dinner will be a disaster, remains exceptionally optimistic and tries to calm things down while singing Christmas carols. Something that’s totally unthinkable when sister Kate (Holly Weston) waltzes in with her friend Scott (Kris Saddler). Not that Kate is a pronounced racist, but her naive, ill-considered comments are still hurtful. Witnessing these interactions in itself made the film interesting. And when they realize the next day that the house is wrapped with steel tubes and the television spontaneously starts spewing messages, it’s the beginning of even more squabbling. As the film progresses, everyone is on the verge of becoming paranoid. The whole claustrophobic situation creates distrust and suspicious thoughts among the family members.

As in most low-budget movie, the entire film takes place in one and the same location. That isn’t necessarily a disadvantage. “Await further instructions” shows in a solid way how hysteria and helplessness take control of people when they find themselves in a hopeless situation. Conspiracy theories and disaster scenarios ensure that family members are diametrically opposed. Is it an environmental disaster? A chemical war? Or are there extraterrestrials who have conquered the world? Or are they all victims of a television program with hidden cameras? Does the film end up with a symbolic image of the Big Brother principle? Or does it show how television has crept into our daily lives and we blindly follow the instructions that appear on it? Messages that cause the family members to turn against each other and shamelessly hurt each.

On a psychological level, you can call this film a success. The SF section, which unfolds towards the end, I found less successful. That part felt rather absurd and grotesque. It seemed to me that the main part looked like a psychological family drama and the denouement was made up at the very last moment. As if it was meant to be satirical. And I wouldn’t call it a horror. All in all, I didn’t think this surreal spectacle was so bad. Especially because of the excellent acting and the sometimes magisterial footage. But I’m afraid this film won’t be appreciated by the vast majority of cinemagoers.