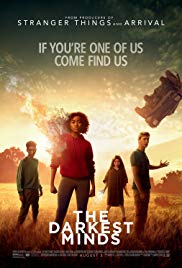 Imprisoned by an adult world that now fears everyone under 18, a group of teens form a resistance group to fight back and reclaim control of their future.

This is not about politics.
It’s about your children.
This is about our children.
We will find a cure and we will save our precious sons and daughters.

If you want to form a sentence with the words “monotony”, “mediocrity”, “clichéd sameness” and “corny”, you can do that without any problems along with the movie title “The Darkest Minds“. Well, I’m getting sick of the concept of dystopian teen films. Even though they mixed it this time with a kind of “X-men” mood. Apart from some crackling electrical flashes, a storm with trees crashing down and flying containers, there’s not much more to see here. And don’t expect impressive special effects either.

Actually, I already had the feeling while watching “The 5th Wave” that after the successful franchises of “Divergent” and “The Hunger Games” we would be flooded with weak duplicates of this genre for years. Duplicates of which they hoped it could be the start of again some successful sequels. However, I’m afraid this is yet again another feeble attempt that will fail. Simply because “The Darkest Minds” is really embarrassingly bad.

Watch out for the orange and red ones.

This time it’s not a devastating war or an alien invasion that makes our planet a place where survival is priority number one. No, it’s a sudden emerging disease (Idiopathic Adolescent Acute Neurodegeneration) that actually kills about 95% of young people. I suppose this is a kind of childhood disease of a higher level. And those who survive suddenly have supernatural powers.

They are locked up straight away in youth camps by the adult world. Allegedly to examine them and to find a cure. Ultimately it’s because these adults, like with the X-men, are afraid of mutants and secondly because they are afraid to lose power. There, on the basis of their acquired powers, those kids are divided into groups. Each with a specific color, whereby those from the orange and red camp are considered to be the most dangerous. In other words, persons who’re allocated to these two groups, simply are going to be eliminated. Likewise, the lovely girl Ruby (Amandla Stenberg) who appears to be part of the orange team after being tested.

For the umpteenth time, we see how moronic and stupid adults are portrayed in these kinds of films. Orange means that a person has the ability to manipulate someone else’s thoughts. You don’t need to be an Einstein to know how Ruby manages to save herself from this life-threatening situation. The moment Ruby escapes from this concentration camp and joins a group of teenagers, you can get ready for the most sugar-coated and predictable storyline ever.

The group of teenagers, consisting of Liam (Harris Dickinson), Chubs (Skylan Brooks) and Zu (Miya Cech), are looking for a kind of youth camp where children are safe. It’s led by a legendary figure with the name “The Slip Kid “. And before you know it, love is in the air and Ruby finds the ultimate hint to find out where the camp is located. And finally, there’s also a mandatory plot twist. Only viewers who have fallen asleep above their popcorn, haven’t seen that one coming. The only thing I could appreciate was the end. I can’t say it was really original. But it’s kind of daring. But I came real quick to my senses when I realized that sequels with similar nonsense are likely to be released in the future.

To be honest, you can’t blame the film studios to release such films. After all, the profit is the most important thing for them. And when a specific genre is already a hype for a number of years, you have to continue with it until the subject has been completely milked dry. And as long as the theaters fill up with teenage girls (With helmets on because they run into walls while being constantly focused on their smartphones) who dream away while watching a film full of female heroism and who swoon when looking at a handsome Boyband-like wuss, the studios continue to produce these type of movies.

Till one day when those youngsters themselves exclaim in disgust (the age of reason probably) that they’ve had enough. And despite the political correctness in this film and the moral of equality (an “It doesn’t matter what color you are”-like message), it still remains mediocre crap with superheroes in it. So even though colors play an important role in “The Darkest Minds“, it’s just a colorless (and also uninspired) teenage film.