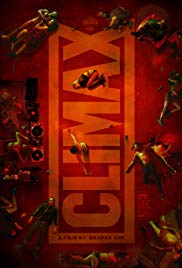 French dancers gather in a remote, empty school building to rehearse on a wintry night. The all-night celebration morphs into a hallucinatory nightmare when they learn their sangria is laced with LSD.

During the past 20 years, Gaspar Noé has made just five feature films.  Climax – which has recently been released on DVD and Blu-ray – appeared after the shortest gap in his filmography, following his 2015 3D feature Love.  The list of people you could share a Noé film with is as short as the director’s résumé, as his works are never an easy watch.  That said, both Love and Climax have marked a relative mellowing, of sorts, for the director; coincidentally or not, these films are the only two to be made by Noé since he turned 50.  Yet, if these works can indeed be said to be tamer, it says more about the films that came before (most notably 2002’s Irreversible), and Noé’s work, even at its most palatable, is not for the faint of heart.  I once attended a screening of his Enter the Void which was introduced by the director, and was struck by how affable, funny and charming he was.  If you met this guy in the street, you’d never believe he was the man behind some of the most black-hearted cinema we’ve ever seen.

Climax, which stars the excellent Sofia Boutella, is a film of two very distinct halves.  Near the beginning we are presented with the full credits, along with a reference to the film we’ve just seen.  Hang on, is this story going to be told backwards, à la Irreversible?  Not really, although we do see part of the ending at the beginning, making the bulk of the film, quite appropriately as it turns out, one big flashback.  For the first main section, we’re privy to a dance troupe’s final rehearsal before they’re due to head off on tour.  We witness them performing their energetic routine, and even if, like me, you have no interest in dance, you are very unlikely to be left unimpressed by this incredible extended sequence as various voguers, waackers and krumpers all do their thing in front of Noé’s camera.  That this is all done in a solitary take makes it all the more remarkable – for decades, we’ve grown tired of cinema’s tricks and CGI, but to watch this group perform like this with no edits of any kind is refreshing in a way that’s hard to describe; it almost makes you feel as if a reset button has been pressed and cinema has got its mojo back.  It’s pure bravura filmmaking, and certainly the most exhilarating dance sequence I’ve ever seen on film.

Following these exertions, it’s time for a party to mark the end of the intensive rehearsal period.  The dancers break off into couples, and we get to eavesdrop on the various conversations, which almost invariably involve bitching about other members of the troupe.  Noé breaks from his one-take approach here, and dips in and out of the different discussions in a fidgety manner.  None of the dialogue is particularly consequential, but it does give each of the characters a little more room to establish their personalities (prior to this, we’ve just seen fragments of recorded interviews with each member).  After this pause for breath, there’s another exciting, prolonged dance sequence, this time focusing on the dancers’ individual talents; as before, Noé chronicles this with an unblinking eye, although this time around it’s from an overhead vantage point.  And then, most surprisingly, another set of credits appears – which serves as a line dividing the film’s two very different parts.  Noé’s debut feature, I Stand Alone, contained an on-screen warning which gave you 30 seconds to abandon the cinema before the film really plummeted into the cesspool.  Climax‘s mid-film credits could be similarly viewed as a warning, albeit of the coded variety – after all, don’t we normally leave once the second lot of credits roll?  Indeed, one person at the screening I attended adhered to this protocol.

If you choose to keep watching, you’d best buckle up.  As part of the celebrations, the majority of the dancers have been swigging sangria, and it soon transpires that someone has spiked the bowl.  It doesn’t take long for the troupe to realise what has happened, and accusations soon fly.  Who’s behind this scarcely matters (although watch carefully and you’ll spot the perp), as the dancers are now powerless in the grip of a highly potent hallucinogen.  While we can’t see what they see, we are still presented with something resembling a waking nightmare in which all hell breaks loose; in case we’re in any doubt about this, the last stretch of the film sees the camera flipped upside down as the chaos unfolds against suitably infernal red emergency lighting.  This post-credits section is arguably the lesser half of the film; it’s remarkable in that it all appears to be filmed in a single take (although some very clever edits are more likely), but anyone familiar with Noé’s work will be presented with something which looks slightly reheated.  Which doesn’t stop it from being uncomfortably compelling – the film is many things, but being dull is never one of them.

Climax doesn’t really show too many signs of progress as far Noé’s career is concerned, but it does reinforce his position as a filmmaker of incomparable, fizzing technique; few directors have mastered sound and image in the way that Noé has and, just as with with his previous four features, Climax is a technical marvel.  It also has Noé’s fingerprints all over it, in everything from the use of Daft Punk’s Thomas Bangalter on the soundtrack to its trademark Godardian intertitles.  What’s all the more remarkable is that the whole thing was put together in a matter of weeks; working without a script, Noé started the film in early 2018 and had it ready for screening at the same year’s Cannes in May.  That’s a quick turnaround for any film, let alone one as dizzying and dazzling as Climax.  While it’s not a film that can be recommended unreservedly, it’s certainly one to carefully consider should you find yourself jaded with present-day narrative cinema.