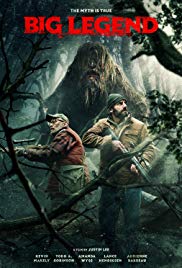 An ex-soldier ventures into the Pacific Northwest to uncover the truth behind his fiance's disappearance.

I don’t believe in fairy tales.

Another film about the legendary Sasquatch, better known as Bigfoot. A few months ago I saw the film “Primal Rage” which I really could appreciate despite the low budget. And that because of the tension and the scarce moments of gore that were incorporated in it. In the movie “Big Legend” you have to deal with the same horrible monster, but unfortunately, that’s the only similarity with the previous movie. The film is long-winded and boring at certain times. And it’s not bloody at all. Something you should expect in a monster movie with an extremely powerful, hairy creature. A creature that tears off limbs and effortlessly slides vehicles in front of it. Not that “Big Legend” was torture to watch, but I still had to make an effort to keep my attention. And I always felt the urge to scroll on my tablet for something interesting to read. Not a good sign.

First happy and then his girlfriend disappears.

Although, it didn’t start too badly. We see Tyler (Kevin Makely) and Natalie (Summer Spiro) hiking through an idyllic looking landscape. It provides some unbelievably beautiful images. It’s a peaceful scene with two lovers who unquestionably love each other passionately. And then our friend Tyler also came up with the plan to ask his loved one to marrie him. Can it be even sweeter? Well, life has certainly been good to Tyler. Until his fiancée is dragged into the forest with their tent and the rest of the stuff, while her future husband is exploring the surrounding because of some suspicious noises. Well, Tyler ends up in a psychiatric institute after the disappearing of Natalie. And when he’s released, the only thing he can think of is to return to the scene to see if he can find his missing girlfriend again. But your gut’s scream at you he better had stayed sitting by his fireplace.

I truly hate the word “chief” from now on.

Not because a giant furry ape is going to make life miserable for him (Isn’t that the initial subject of this film?). But mainly because he runs into a colorful figure who would drive me completely crazy instantly. If I had received a Euro every time Eli (Todd A. Robinson) says the word “chief”, I could quietly retire. I expected Tyler to aim his automatic rifle at this forest runner after a while, instead of the still-to-be-spotted monster. Moreover. Eli has been in these forests for a long time already, hoping for that moment to see the legend. And yet he never saw it. Apparently, there are some primitive symbols placed here and there (by the Chinook) in the forest that somehow define a boundary the creature won’t pass. The fact that Eli never went beyond this symbolic border could be an explanation. However, afterwards, it appears that the symbols are damaged in certain places. A bit weird. And really confusing. But there are more of those bizarre and nonsensical facts.

5 Seconds and he saw the strange shadow.

The police dropped a box full of possessions of the missing Natalie at Tyler’s place. Tyler starts to look through it all and scrolls through the photos Natalie has taken during their trip. And would you believe it? Suddenly he discovers a photo with a suspicious shadow in the background. Now, or the police are doing an extremely poor job in that part of America. Or they have not even bothered to view the device. Except for Tyler, who discovers it within 5 seconds. And wouldn’t you call the authorities after your pick-up is being twirled around at night while sleeping in it and you discover a huge footprint in a muddy puddle? And who the hell hung up the signs with “No trespassing”? Bigfoot itself? And hasn’t Tyler been an Army Ranger for 12 years? Well, then he has forgotten many of his army instincts. Not only did he lose his backpack at a certain moment. The next moment he even leaves a water bottle behind. Not very smart I thought.

I’ll skip a possible sequel for sure.

I wasn’t really impressed by this film. Even though the scenery is wonderfully beautiful and everything has been reasonably portrayed, it failed in other areas. The acting was so-so. At certain times it wasn’t too bad. Next moment it feels amateurish. Perhaps also because I found the character Eli highly annoying. They also remained rather vague about the background of the two main characters. The most positive thing was Bigfoot looked like. In any case, better than the hairy beast from “Primal Rage“. It seemed more realistic and threatening, even though it’s mostly not explicitly shown. The biggest annoyances for me was the fact that this movie brings nothing new, has an unsatisfactory ending and ends with a hospital scene that shows that a possible follow-up could be made. Most likely I won’t have much trouble skipping that one. Be sure of that, Chief!