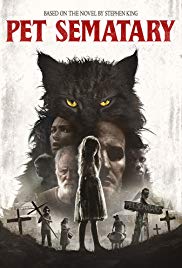 Dr. Louis Creed and his wife, Rachel, relocate from Boston to rural Maine with their two young children. The couple soon discover a mysterious burial ground hidden deep in the woods near their new home.

A place to bury our pets and remember them.

In the distant past, I was an avid reader and devoured books constantly. That has been considerably reduced over the years. But, occasionally I grab a reading book. Generally, that only happens during a well-deserved summer vacation on one or another beach. Stephen King‘s oeuvre has always enchanted me. This summer vacation I read his book “Elevation” in one go. Not that it was high-quality literature, but King is such a wonderful storyteller whose stories grab you and don’t let go. That actually applies to most of his books. Of course, there are also film versions of his books that are worth seeing. Personally, “Christine” and “Carrie” are movies (horror-related) I enjoyed the most (but I can easily name a few more). And the film “Pet Sematary” from 1989 can also be counted with films that had a huge impact on me. The only question I first asked myself (and many others too, I guess) was: “Is it really necessary to release a remake of this film?“.

Those who know me a little have read already a few times that I hate remakes, reboots and so on. I admit that cinematographically and when it’s about acting, it’s most likely to be an improvement compared to the original. But the story, the content, the soul of the film, as it were, will remain the same. And isn’t that a bit too easy? But then again, they could also rigorously change the content or storyline. But don’t you think this would create a completely different movie? And is there really someone who has the guts to thoroughly change a movie classic? Well, Kelvin Kölsch and Dennis Widmyer were brave enough and succeeded in retaining the spirit of the story, despite the drastic plot changes. Only, it didn’t impress me as much as the original did.

Some elements from the old movie escaped my memory. For example, there’s Zelda (Alyssa Brooke Levine). Either her part wasn’t explicitly emphasized in the first film. Or the number of years have begun to take its toll on me. In any case, this was actually the most creepy image used in this remake. The most crucial adjustment they have made is the choice of the victim. In the original, the youngest son Gage (Hugo / Lucas Lavoie) can’t avoid a rushing truck. I remember this fact as very shocking to me. That sweet-looking little guy, the kite falling down and the tumbling children’s shoe. I can picture it right now. Not that the choice in this remake is less terrible. But it didn’t shock me as much as it did in the original film.

This choice not only gave the whole thing a different turn, but the scaryness of the film also suffered a major blow. I found the role Gage played in the first film, more creepy than that of Ellie (Jeté Laurence) here. On the other hand, the cat Church looks more ominous and evil, than its alter ego in the original film. And the dead student Victor Pascow (Obssa Ahmed) also came into the picture more explicitly. Broadly speaking, the film remains true to the original idea. The concept of a father’s all-embracing love for his child. And the will to cross borders to reverse it all. There are no surprises in that area. Which in turn leads to the initial question: “Why a remake?“.