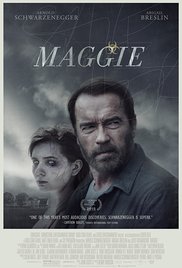 After a couple of weeks seeking out his teenage daughter Maggie, Wade finds her in the quarantine wing of a hospital. Maggie has been infected by a lethal outbreak that transforms the victim into a zombie. Wade's friend Dr. Vern Kaplan releases Maggie to spend her last days with Wade and her family. Her stepmother Caroline asks Wade to take their little kids to her sister's house to keep them safe. While Maggie is slowly transformed, Wade stays with her protecting Maggie. But Dr. Vern warns him that the moment that he will have to take an ultimate decision is closer.

“I made a promise to your mother,that I would protect you.
Yeah, but…what about you guys?
What if I hurt you?
Don’t worry.Caroline and I, we know the precautions.”

Schwarzenegger performing in a horror that eventually turns into a drama. It’s not what you expect from this action film icon. Strange but true, the one-liner “I’ll be back” is even being recycled, but it’s not said by Arnold this time. One fact is certain, Schwarzenegger will not go down in history as the actor who’s suitable for a character part, but I must admit that the effort he did here, produced an admirable final result. After acting as a barbarian, a cyborg returning from the future, a clumsy kindergarten teacher and a pregnant guy, he acquitted himself in a proper way of his role as a concerned father who takes his infected daughter back home, so that she’s not being quarantined at the moment she transforms into a bloodthirsty zombie.

Once again a virus is the cause that the number of ardent vegetarians among the US population drastically shrinks and slowly but surely turn into zombies, better known as “necro-ambulist”. Wade (Schwarzenegger) is an older farmer, who’s looking since a few weeks for his daughter Maggie (Abigail Breslin). When he finally finds her, she turns out to be infected after being bitten by such a barbecue fanatic. Wade is determined to take care of her at home. This is allowed because it takes a few weeks before a victim effectively makes the “turn” before going into a zombie-status. At that moment the verdict is that she needs to be quarantined. Ultimately that means that the authorities let the infected citizens huddle together (regardless what the degree of infection is) so the problem is solved by itself (through self-consumption so to speak).

I like a zombie movie now and then. Both the straightforward version, where there is excessive use of gore and bloody scenes with massive amounts of human remains that needs to be devoured and juicy brains, as the versions that differs slightly from the horror genre being created by Romero. “Dead within” is such a movie where the emphasis isn’t on the living-dead creatures. And “Warm bodies” you can call the rom-com zombie movie par excellence. Also in “Maggie” you shouldn’t expect apocalyptic images full of bloody zombies. Those images are restricted to two confrontations and a few flashbacks. The only horrifying is the slow change Maggie undergoes and a moment of self-mutilation. The final decision Wade has to make is his most daunting moment.

Maybe that’s the only thing I could criticize. Schwarzenegger actually doesn’t do anything special throughout the whole film, except mulling over the choice he has to make at the moment he starts to smell like a well-cooked bratwurst according to Maggie. Or putting his daughter in quarantine. Or administering a painful drug cocktail. Or the radical solution. You can see him pondering about it throughout the movie. His weathered, bearded face speaks volumes. But he does that with sincerity and conviction. The most memorable moment was when Maggie spent a night with some friends somewhere in a field completely with sulfur sticks and a somewhat inconvenient conversation that arose. A touching reunion where everyone pretended that everything was normal, but at the same time they all realized that this would probably be the last time they could enjoy each other’s company. And of course the final scene that reminded me immediately of “World War Z“.

It’s obvious that the emphasis in this film is on the father-daughter relationship. Schwarzenegger and Breslin demand therefore the most attention and displace the supporting cast completely to the background. The following would sound a little trite: “Arnold plays a role in such a way you’re not used of him.” But in the end I could only conclude that it was just like that. He’d better skipped all previous performances (especially “Sabotage“). So I was clearly pleasantly surprised. About Breslin I can only say that this is a wonderful actress and a future star on the Hollywood firmament. Despite the limited dialogues, this was a brilliant acting performance in which she shows in a subtle way that she’s aware of her approaching end. But her being a rising star, was something I already noticed in “Wicked blood” and recently in “Final Girl” (although this wasn’t such a great flick). I didn’t know she also played a part in “The Call“. And another little fact: Schwarzenegger’s name in “Escape Plan” was Ray Breslin. What a coincidence !

Conclusion: I’m sure the hardcore zombie fans will say that this is an abominable bad movie because of the total lack of gore and bloody scenes. However, I was impressed and felt that this film put the concept of a zombie movie into a very different light. The loving relationship between father and daughter is the central theme and it even tends to get melodramatic at a given time. And this in a horror film ?