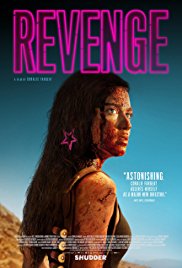 Never take your mistress on an annual guys' getaway, especially one devoted to hunting - a violent lesson for three wealthy married men.

Even for your tiny little oyster brain, it shouldn’t be too difficult to understand.
So, I’ll ask you again.
Did my height change since yesterday ?

I was watching “Revenge” already for a while and I was still wondering who played Richard. I was stunned when I found out it’s Kevin Janssens. He appeared on Belgian Television for years in well-known Belgian TV series such as “Vermist” and recently “Salamander“. I was completely surprised to see this Belgian actor in a sadistic, partly French-spoken revenge film à la “I spit on your grave“. That’s one thing I was enthusiastic about. But to be honest, I thought the film was sometimes a bit too much.

I was glad the abuse scene wasn’t extensive.

For many, a rape-revenge movie is not exactly something they were waiting for. Personally I thought “I spit on your grave” was a bit too disgusting to watch and the rape scene was too realistic. In fact, this last shocking film can be divided into two parts. The revenge part is almost equivalent in time to the terrible first part. On that level I found “Revenge” more bearable and the woman-unfriendly part is more limited in time. The survival and revenge part covers most of the film. But this part is so full of improbabilities and exaggerated actions that it seems rather laughable.

Do you believe that films made by Quentin Tarantino such as “Kill Bill” or “From dusk till dawn” use a ridiculous amount of blood on screen? Well, you’ll be surprised here. The main characters have an impressive amount of blood. I’m sure that employees of a blood bank will burst into tears at the sight of all that wasted life-juice. Vincent Castiglia could paint a mega-oeuvre with it. The blood flows in such amount, that I felt they should wear some flip-flops so that they wouldn’t start sliding and break their neck. Admittedly, I like films that are rather bloody. But this was also a little bit over the top.

Are you sure she isn’t Wonderwoman ?

And that wasn’t the only thing I looked at in disbelief. At one point it seemed as if I had been catapulted back to my youth, watching an episode of “Roadrunner”. With Jen (Matilda Anna Ingrid Lutz) as poor Wile E. Coyote, who always got his butt kicked. No matter what this cartoon figure had to endure (a chest of dynamite that exploded in his hands or a gigantic rock that crushed him into a dime), the darn coyote appeared in the next fragment intact again. Similarly Jen, who makes a fall which was (in my opinion) impossible to survive. And the gruesome wound, which is fatal for most victims, didn’t seem to bother her that much anymore after a while. Let alone how she resolves this painful problem. But this, and other, nauseating, bloody scenes ensure that little bit of realism.

The brutal version of Lara Croft.

In itself, “Revenge” isn’t really a film that only revolves around revenge. For Jen, the most important thing is to survive and not to get caught by these ruthless hunters. The fact that these macho men ultimately find themselves on the short end, isn’t only because of their overconfidence and underestimating their female opponent, but also because Jen’s self-defense instinct comes into effect. I also thought it was fantastic how the film completely transforms the image of Jen. From a lascivious, scantily clad and temptingly dancing, self-confident young woman, into a wounded and fierce fighting female Rambo with a hell of a killer instinct. From sex object to a dangerous Lara Croft. Matilda Lutz, for me a totally unknown actress, fits perfectly in both roles.

An ugly story but the footage looks nice.

Don’t expect a revenge movie to be filled with intellectual dialogues and a magnificent storyline. The principle is dead simple. An individual is abused in a certain way. She or he manages to escape from his or her attackers. And then takes revenge as cruel as possible. The only thing that can distinguish such a film from similar films, is the creativity and the gore being used during the revenge sequences. “Revenge” still has an additional asset. And that’s the way in which everything was imaged. The shimmeringly hot, golden brown desert that contrasts with bright colors. Like the pink and blue windows in the weekend house. The light blue leather jacket from Richard (Kevin Janssens) and the red sexy bikini from Jen. But especially the richly flowing bright red colored blood. And all of this is done together with a subtle montage of short close-up fragments such as a rotting apple, ants hiding for dripping blood, someone chewing a bar of chocolate, the shadow of moving jeeps and the urinating on a desert insect. In short, an ugly story wrapped in a stylistic framework. In this time of indictments against improper sexual behavior, “Revenge” will be the cause of a lot of discussions. I only hope that the members of the “Me Too” movement, won’t apply such practices on their assailants.