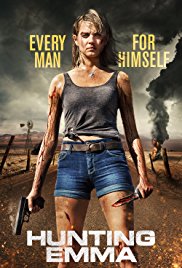 Gentle, beautiful, pacifist Emma witnesses a murder in the wild. Six violent men killing a cop in cold blood. So, they hunt her like an animal in the desolate Karoo. She should have been an easy prey. But life is full of surprises.

It’s quite obvious that I’d compare this one with the movie “Revenge“, which I’ve seen recently. Both films take place in a searingly hot desert. Once again it’s an innocent, vulnerable young woman who’s being chased by some ruthless men. And just like in “Revenge” these macho’s soon learn that it’s not some stupid blonde chick they are hunting, but a ruthless fighting machine whose father (an ex-soldier) has taught her a few tricks about self-defense and survival techniques. The pursuers are just as stupid and overconfident as in the other mentioned movie. And in “Hunting Emma” there’s also a lot of bloodshed.

My first South African movie ever.

“Hunting Emma” or “Jagveld” is different from “Revenge” in all kinds of ways. The acting is not of the same level (although you can discuss about whether or not there’s some kind of acting in a revenge flick). The amount of blood that flows looks credibe. In short, the victims don’t have an inexhaustible blood reserve. The retaliatory actions are reasonably soft. But the main distinction can be found in the used language. I had no idea this was a South African film. You can imagine my surprise when I suddenly realized that I understood quite a bit while watching this film. It’s a juicy mixture of weird sounding Dutch and hip English expressions. I have to admit that I really love this South African language.

A perfect working car is necessary in South Africa.

It all starts when Emma le Roux (Leandie du Randt), a beloved school teacher, is on her way to her father Jacques le Roux (Tertius Meintjes), to enjoy a well-deserved summer vacation. Only disaster strikes on the road when her car breaks down. Coincidentally, this is just near the place where Bosman (Neels van Jaarsveld) and his gang arrived after they’ve kidnapped a policeman who stopped them for a routine check. I suppose Bosman and his gang are involved in drug smuggling. Anyway, something they want to keep hidden from the local authority. Emma happens to be in the neighborhood cursing at her her car because of a leaking radiator. That’s when she hears a shot in the distance. Before she knows it, those kooks are chasing her just so they can shut up this annoying witness for good. It’s such a typically composed gang. Bosman, Baz and Jay are the die-hard criminals without any compassion. AJ and Boela are, in my opinion, two wannabe criminals who want to make a quick buck. And Piet (Luan Jacobs) is the wimp of the gang who will shit his pants faster than shooting a real revolver.

Not really original, but worth a try.

Despite the shortcomings, I found the end result admirable. Leandie du Randt convinces as the adamant Emma. Just like Jen in “Revenge” she turns out to be a real Lara Croft who suddenly concocts smart diversions and behaves as a fury while outsmarting her attackers. Among the latter are mainly Neels van Jaarsveld with his psychotic traits and softie Luan Jacobs who excell. Maybe this African film borrowed a bit from other films and as a result won’t score high in originality. But it sure radiates Hollywood allure. Karoo film describes the film on their facebook page as follows : ” polsende aksie in ware ‘Quentin Tarantino-styl’ wat die kyker uitdaag” (Pulsating action in true ‘Quentin Tarantino-style’, challenging the viewer). Brilliant. Nie?