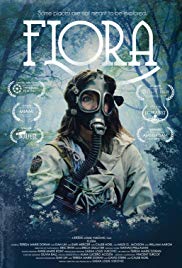 In 1929, an expedition of university botanists enter an uncharted forest where they discover, and must escape an ancient organism.

Rudyard, there are no people living in this forest.
Do you see any animals?
There’s no flora with any color, nothing to allure insects!

Are you someone who prefers to spend his free time in his perfectly tended garden? Is your lawn as if a delegation from the International Golf Federation could arrive any minute to ask if it could be used as a “green” at a next golf championship? Do you spend hours in your garden staring at freshly planted and potted flowers and plants? Are you an expert in fertilizing, scarifying, digging, pruning, grafting and draining? Well, I guess this film is really suitable for you. Because “Flora” is actually nothing more than a nature film that every botanical film viewer will be excited about. Do you know which film quote always came to me? “Run, Forrest, Run!“. Only here the main characters are running away from a forest. They might have used the following alternative movie title: “Attack of the killer pollen“. That about covers it.

“Flora” certainly isn’t a bad film. But for those who don’t see themselves as purebred nature lovers, this film may seem terribly boring. What they managed to do, is to show a decent image of the 1920s. I found the props and atmosphere perfect. All the pieces fitted. The oldtimer, the costumes, and the used music. Perfectly chosen. Everything seemed innocent and frivolous in those days. The naivety and insufficient knowledge are portrayed in a proper way.

The resources available to the six scientists are fairly limited. Plants are cataloged in notebooks. Illustrations are made with the use of a whole array of colored pencils. No electronic worksheet and digital camera as one would use in the present time. You won’t see the main characters wandering around with a tiny headphone connected to a compact MP3 player. No, here they are lugging around with an impressive gramophone with a huge horn. Before you know it, an old-fashioned foxtrot echoes through the forest after putting on such a fragile record.

Praise for the creators of this indie-horror. Because despite the extremely limited budget, film-technically it looks fab. Even the for me unknown actors made themselves meritorious in the field of acting. Admittedly, sometimes there was a touch of overacting. And they tried to bring drama in a forced way. But this was certainly not irritating. Unfortunately, it was all fairly superficial with a painfully slow pace. It seemed after a while that the entire film consisted of exploring the surrounding nature. And yes, the discovery that no living organism can be detected in the surrounding area can easily be called troubling. But it’s never really exciting.

Trust me, I’m not someone who only associates horror with gory slaughter and diabolical entities. And also, a forest in a horror movie isn’t automatically linked to a lonely, deserted wooden cabin. Or a wandering, bloodthirsty creature that suddenly shows up from behind a tree and rips you into pieces. So all the praise to try a different idea and for once think out of the box. However, I don’t think this symbiotic fungus that kills every human and animal life is something that ensures it to be a movie with nail-biting suspense. All in all, the starting point of the film wasn’t bad when you talk about originality. But apart from some beautiful nature shots and moments in which the dialogue seemed interesting, it’s all relatively boring and monotonous.