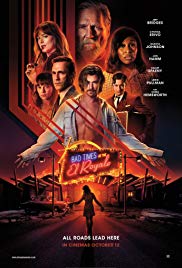 Circa 1969, several strangers, most with a secret to bury, meet by chance at Lake Tahoe's El Royale, a rundown hotel with a dark past. Over the course of one night, everyone will show their true colors - before everything goes to hell.

The El Royale is a bi-state establishment.

or the great state of Nevada.

Warmth and sunshine to the west…

or hope and opportunity to the east.

Which would you prefer?

Let me get straight to the point. Yes, this film by Drew Goddard refers to several masterpieces from the past. And yes, it has the atmosphere, story structure and the look of a Quentin Tarantino film. You will probably read this on every movie site. Is this necessarily a bad thing? Does this mean Goddard doesn’t have his own style? Is it necessary to compare a brilliant film such as “Bad times at the El Royale” with Quentin Tarantino’s oeuvre? Personally, I don’t think so. When I get sucked into the story while watching this film, just like “The Hateful Eight” did with me, then this is a merit of Goddard himself. If a movie succeeds in keeping my eye fixed on the screen for more than 2 hours, then it’s worth a compliment. And when one compares it with another grandmaster, I guess it’s a compliment for both of them. I’m sure Tarantino will like this film as well.

For starters, the location itself is pretty original.

In any case, the location where the story takes place is in itself already original. A captivating motel/hotel built on the border between Nevada and California. You cross the border, as it were when you walk from the reception to the jukebox. And different laws are applied in every part of this unique hotel. But since a while, it’s abandoned. Far away from other metropolises so consequently it’s also cheaper. In earlier times though, the “El Royale” was a secret location where public figures stayed over for a night and where they could engage in rather appalling practices, far from civic life. This is where the entire story takes place. A story with different storylines with each time a character in a leading role who happens to looks quite ordinary at first acquaintance. As the film progresses, it turns out they all have their own hidden agenda. And all these storylines are entwined with each other until it finally ends in a rousing apotheosis.

So, it’s not a secluded cabin which is unreachable thanks to excessive snowfall (I know. I’m comparing again). And the pawns that are set out at the beginning (like in a game of Cluedo) are a priest (Jeff Bridges), a soul singer (Cynthia Erivo), a vacuum cleaner salesman (Jon Hamm), a rebellious young lady (Dakota Johnson), and a shy young receptionist (Lewis Pullman). A grab-bag of people who apparently happen to spend the same night in El Royale. After the introduction of the characters, the film is divided into episodes and a fragmentary web of storylines arises in which the dark secret of each character comes up. And before you know it, the vacuum cleaner dealer is someone who resembles a secret agent, the priest is looking for something more valuable than God’s message, the rebellious lady is on the run from someone devilish and the receptionist has a past full of victims. Only the soul singer seems authentic and has a damn good voice.

The less you know, the better.

Maybe it sounds a bit vague. But believe me: the less you know, the better. I was surprised again and again by the various twists. And those twists sometimes come from an unexpected angle. It wasn’t only the way of filming that pleased me, but also the subtlety with which it was all interwoven. Some story elements were shown from three viewpoints. Time and time again in a new storyline. Normally this could lead to confusion. But here it fits perfectly. And this all in a typical 60s setting with accompanying props, appropriate clothing and a Wurlitzer that produced that distinctive Motown sound. Take “Pulp Fiction“, “Twin Peaks” and “The Hateful Eight” and you get a movie like “Bad times at the El Royale” after a good shake-up. Simply wonderful.

Let’s talk about renditions. Actually, there is no character that disappointed. Each has his/her reasons for being there and has his/her own personality traits. It was clear from the beginning they were all enjoying themselves while playing their part. Once more the acting of Jeff Bridges as a priest was a joy to watch. Even though he talks as if he’s nibbling on chewing tobacco or a hot potato as in “R.I.P.D” and “Seventh Son“, I simply thought he was sublime as the priest with Alzheimer’s. And certainly, the interactions between him and Cynthia Erivo are simply great. She also has a beautiful voice that came in handy in a specific splendid scene.

Chris Hemsworth. Give that man a cigar.

Personally, I thought Lewis Pullman was the most imaginative character as the labile receptionist. And Dakota Johnson not only had the most titillating body contours, but she also took on the most insane part. And finally an honorable mention for the admirable performance by Chris Hemsworth (he’s forgiven for his role as Kevin in “Ghostbusters“). He’s a cult leader who shows up as a dead calm Jim Morrison-like creep (Watch him dance). The beginning of an out of control denouement.

A must see? Yeah sure!

“Bad times at the El Royale” is definitely recommended and is not boring for a second. I thought it was an original tinkered story that ends in a shrewd way. Add to that a top cast and an atmospheric décor that is put in the picture with the help of masterful footage, and you can be sure that you’ll enjoy the full two and a half hours. And claiming that the film is right up Tarantino’s alley, certainly is true. But to assert that it’s a shameless imitation, I find a little bit exaggerated and a typical sour note from a sourpuss.