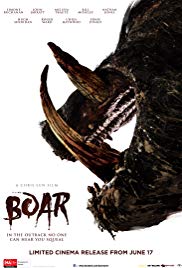 In the harsh, yet beautiful Australian outback lives a beast, an animal of staggering size, with a ruthless, driving need for blood and destruction. It cares for none, defends its territory with brutal force, and kills with a raw, animalistic savagery unlike any have seen before.

Either I’m pissed off my chest mate,
or that’s the biggest fucking boar I’ve ever seen.

In 1955 we had a giant octopus in “It came from beneath the Sea” and last year we had the giant shark in “The Meg“. And in between, we were treated to a manifold collection of giant animals. There were also enormous ants (“Empire of the ants” from 1977), a big ass spider (“Big ass spider” from 2013), a giant snake (“Anaconda” from 1997), a monkey (“King Kong” from 1976), a crocodile (” Rogue ” from 2008), cockroaches (“Bug” from 1975) and wasps (“Stung” from 2015). And after doing some research you’ll notice there are more films about huge animals. Perhaps the makers of this film thought they had something original when they came up with a whopper from a wild boar. And to be honest, I thought so too. Turns out there are other movies with a frenzy boar, such as “Razorback“, “Pig Hunt” and “Chaw“.

For starters, it isn’t as bad as Lake Placid: Legacy.

I was convinced that this film could never be as bad as “Lake Placid: Legacy“, where a big crocodile was chasing a group of young people. This was really a crap movie. A completely ridiculous story, stupid acting and a monster that’s hardly shown on the screen. All in all, a waste of my already scarce time anyway. About “Boar” I can only say that the acting was generally not too bad. The boar was sufficiently visible. And there were even some funny moments in it. But to claim that this was one hell of a movie is also a bit exaggerated. It was full of improbabilities. And the story itself was also rather simplistic.

Wow, and you expect the boar being gigantic. Wait till you see Nathan Jones.

The story is set in Australia. The fact that the Australian production house Slaughter FX released this film (in the past they also released “Charlie’s farm“) made me feel hopeful. Frankly, I think most Australian horrors are sublime anyway. Maybe it has something to do with that beautiful Australian accent. It makes me instantly happy. So you’ll hear the stop word “mate” regularly here. There was no indication that the Monroe family their holidays would turn into a real nightmare.

Debbie (Simone Buchanan) and her American husband Bruce (Bill Moseley) are on their way to Debbie’s brother Bernie (Nathan Jones). Together with the rest of the family. If you already think that the size of the wild boar is going to be impressive, then you’ll certainly be impressed by Bernie’s height. What a giant. He looks like a kind of Obelix who likes to eat such a wild pig for breakfast. So I was looking forward to a “Clash of the Titans”. Apparently, Slaughter FX are fan of Nathan Jones because he was also allowed to take on the role of Charlie in “Charlie’s Farm“. It’s even mentioned briefly in this movie.

How come it got so big?

Let’s talk about the subject: the gigantic wild boar. If you set up such a typical monster film as “Boar“, then you know in advance that you won’t get a phenomenal and astonishing story. The only thing that counts in such films is: how frightening and horrible is the huge monstrosity that kills so many innocent people and in what a horrible way they are slaughtered. The rest is secondary. Furthermore, you need to empty your head and don’t ask too many questions about the hows and why. Because it all remains a mystery.

Is this wild boar so gigantic because of the consumption of large quantities of truffles or acorns? Or did it roll in a pool of chemically polluted mud? Was it a hunter shooting a load of lead in its buttocks after which the beast got so mad it took on such a grotesque form? Or is the beast coming from the underworld? I have no idea.

But what you can say is that the creature does have some remarkable skills. It turns out to be an expert in camouflage because nobody has ever seen the monster roaming around. And I thought Australians were outdoorsy who are connected with nature and spend a lot of time in the bushes with the local wildlife. Furthermore, the boar has an ingenious GPS system because it always appears in the right place at the right time.

The biggest disappointment, however, is the visualization of the creature. It’s clear they used a model for the close-ups. A kind of XL Muppet of the Muppetshow. And on rare occasions, the digital version is used. But those images are extremely bad. Only when you see the monstrous head with gigantic tusks full of mucus, blood, and mud this pig looks frightening. And you can expect a few bloody, gory slaughter scenes when this monster tears up his next prey.

You love movies with giant creatures? Oh well, try it.

“Boar” is not of a high level and has its weak moments, but this is compensated by its uncomplicated goriness and sometimes awkward humor, such as the clumsy doings of Ken (John Jarratt) and Blue (Roger Ward) or the embarrassing behavior of Bruce (Bill Moseley). The most annoying aspects were the exaggerated flirting of the two youngsters Ella (Christie-Lee Britten) and Robert (Hugh Sheridan). And of course the bad CGI. This ensures that the film doesn’t rise above the average. But do you like a monster movie from time to time, you can still enjoy it when you see Miss Piggy roaming around.