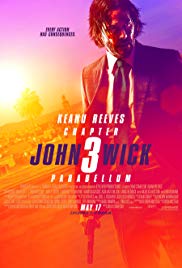 Super-assassin John Wick is on the run after killing a member of the international assassin's guild, and with a $14 million price tag on his head - he is the target of hit men and women everywhere.

The first part of the “John Wick” saga could be called sparkling fresh and original. I didn’t mind the fact that the brain of a goldfish was sufficient enough to watch and enjoy this film. The screen is being filled up constantly with action-packed footage and Keanu Reeves whirled through the image so the pile of corpses rose steadily. And let’s not forget about the “Continental Hotel”. A location that appealed to the imagination.

And then came “John Wick: Chapter 2“. A weak copy of the original. I kept wondering all the time if I wasn’t watching the first movie over again. Personally, I thought perhaps it was time for Wick’s retirement to some kind of “Old Hitmen’s” nursing home.

Well, I couldn’t resist watching “Chapter 3 : Parabellum“. It’s action-rich …. but frankly speaking I’ve had enough of this franchise. I will skip “Chapter 4” if you don’t mind!

PS. Most pleasant feature in this film … Halle Berry. Despite her age, she still looks stunning and delicious.