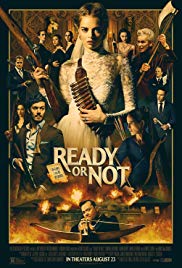 A bride's wedding night takes a sinister turn when her eccentric new in-laws force her to take part in a terrifying game.

So, at midnight you have to play a game.

It’s just something we do when someone new joins the family.

I have to revise my opinion about the horror/comedy cross-over urgently after seeing “Monster Party” and “The dead don’t die” this year. “Ready or not” is yet another film that pleasantly surprised me. Really. I had a great time watching this movie. And not only because the lead actress Samara Weaving looks appetizing, but also because of the entertaining content. I appreciated the morbid black humor as well. It’s not such absurd humor as in “The dead don’t die“. But the slapstick-like events that were used in it, resulted in a spontaneous chuckle sometimes. There were also quite a few bloody scenes in it. In short, it was fun watching this horror flick.

She had to draw that particular card.

And all because of playing an innocent game of “hide and seek”. Grace (Samara Weaving) chose that on her wedding night by pulling a card out of a wooden box. Apparently, the Le Domas family, who made their fortune in the board gaming world, has a recurring family tradition at weddings. So the moment Grace got a wedding ring from Alex Le Domas (Mark O’Brien), her brand new husband, she unknowingly became part of this tradition. So instead of playing a game of hanky-panky and frolicking in the old-fashioned-looking four-poster bed, the wedding couple is requested to go to the family room to play an old-fashioned board game. What Grace doesn’t realize is that there’s one special card that can have far-reaching consequences for the rest of the evening. Guess what. Yep indeed, she draws the card in question.

It was not only the course of the story I found enormously fascinating and ingenious. Also, the setting where it all took place was beautiful to see. A huge Victorian house, full of dark corners and niches. Such a huge villa that suits a wealthy family like Le Domas perfectly. Full of wood paneling, majestic staircases, and richly decorated corridors. As a child, you could easily get lost there. And that’s where the innocent “hide and seek” takes place. At the beginning Grace enthusiastically participates. Until she realizes that nobody from the Le Domas family starts the countdown and starts shouting “Ready or Not, Here I come” (hence the film title). Instead, this insane family has armed itself with old, primitive weapons and starts hunting her.

The most hilarious thing about the film is the family members themselves. All of them are cartoonish, caricatural characters. From the authoritarian somewhat empty-headed paterfamilias Tony (Henry Czerny) and his wife Becky (Andie MacDowell) to the scary-looking, shrewish aunt Helene (Nicky Guadagni). The latter is the most extreme character. She looks as if she’s a member of a satanic cult with her purple suit, black nail polish and upright Cruella de Vil hairstyle. And when you see her running through the corridors, screaming frantically and waving with a huge lumberjack’s ax, the picture is complete. Add a bunch of other family members to it, such as the alcoholic son Daniel (Adam Brody) and his cheeky wife Charity (Elyse Levesque). The coke-addicted daughter Emilie (Melanie Scrofano) and her cowardly husband Fitch (Kristian Bruun). And of course the butler should not be missing. Together they form a colorful “Adam’s Family” -like collective.

Finally something about the horror part. Even though the overall atmosphere is rather lighthearted and caricatural, the hardcore horror fanatic will enjoy certain moments. This gothic horror is filled with a few gory and bloody scenes while maintaining an exciting pace. I found the part in the barn particularly successful and at the same time extremely funny. You see the nail. You see the hole in a hand. And you immediately know how these two facts will be linked. Sublime. And even though you know where it’s going, I was surprised by the denouement. A denouement that would make Quentin Tarantino jealous. And I suppose they wanted to show how huge the gap is between rich and poor. In the end, this was just a minor side issue. “Ready or not” is perhaps the cruel version of the Cinderella fairy tale. But ultimate entertainment was the main goal here. And they certainly have succeeded in that for me.